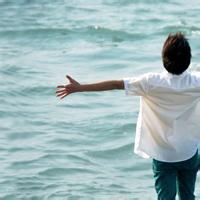 In 1989 an 8.2 earthquake almost flattened America, killing over 30,000 people in less than four minutes. In the midst of utter devastation and chaos, a father left his wife safely at home and rushed to the school where his son was supposed to be, only to discover that the building was as flat as a pancake. After the unforgettably initial shock, he remembered the promise he had made to his son: "No matter what happens, I'll always be there for you!" And tears began to fill his eyes. As he looked at the pile of ruins that once was the school, it looked hopeless, but he kept remembering his commitment to his son. He began to direct his attention towards where he walked his son to class at school each morning. Remembering his son's classroom would be in the back right corner of the building, he rushed there and started digging through the ruins.


other helpless parents arrived, clutching their hearts, saying: "My son!" "My daughter!" Other well meaning parents tried to pull him off what was left of the school, saying: "It s too late! They re all dead! You can't help! Go home! Come on, face reality, there's nothing you can do!" To each parent he responded with one line: "Are you going to help me now?" And then he continued to dig for his son, stone by stone.

The fire chief showed up and tried to pull him off the school's ruins saying, "Fires are breaking out, explosions are happening everywhere. You're in danger. We'll take care of it. Go home." To which this loving, caring American father asked, "Are you going to help me now?" The police came and said, "You're angry, anxious and it's over. You're endangering others. Go home. We'll handle it!" To which he replied, "Are you going to help me now?" No one helped.

Courageously he went on alone because he needed to know for himself: "Is my boy alive or is he dead?" He dug for eight hours...12 hours...24 hours...36 hours...then, in the 38th hour, he pulled back a large stone and heard his son's voice. He screamed his son's name, "ARMAND!" He heard back, "Dad!?! It's me, Dad! I told the other kids not to worry. I told'em that if you were alive, you'd save me and when you saved me, they'd be saved. You promised, No matter what happens, I ll always be there for you! You did it, Dad!" "What's going on in there? How is it?" the father asked. "There are 14 of us left out of 33, Dad. We're scared, hungry, thirsty and thankful you're here. When the building collapsed, it made a triangle, and it saved us." "Come out, boy!" "No, Dad! Let the other kids out first, cause I know you'll get me! No matter what happens, I know you'll always be there for me!"